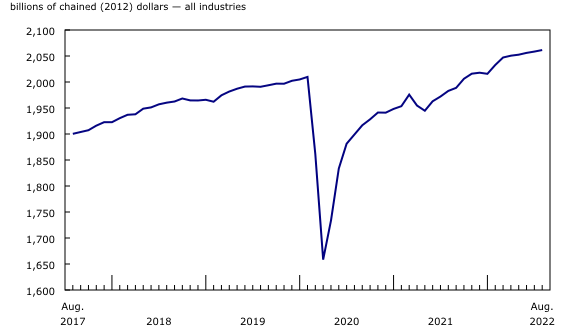 Advance information indicates that real GDP increased 0.1% in September. Increases in the oil and gas extraction subsector, the manufacturing sector and the public sector were partially offset by declines in construction. Advance information for the third quarter indicates that real GDP increased 0.4%. Owing to their preliminary nature, these estimates will be updated on November 29 with the release of the official GDP data for September and the third quarter.

Retail activity rebounds
The retail trade sector rose 1.2% in August, as 10 of 12 subsectors increased. This was a notable rebound from July when output fell back to its December 2021 level.

Food and beverage stores rose 1.3% in August, following two consecutive monthly declines. Broad-based growth was observed across three of the four store types in the subsector, with the supermarkets and other grocery (except convenience) stores along with beer, wine and liquor stores contributing the most to the subsector's growth.

Sporting goods, hobby, book and music stores grew 5.4%, reaching their highest level of output since June 2021. The growth was mainly attributable to sustained strength in sales of sporting equipment, in part due to many team sporting leagues resuming full capacity activities over the summer.

Machinery, equipment and supplies wholesaling (+1.9%) contributed the most to the growth in August as three of four industries were up. Other machinery, equipment and supplies led the growth, as import levels have been elevated since the beginning of the year in support of the construction of a new liquefied natural gas terminal in British Columbia.

Decreases in the farm product (-9.4%) and personal and household goods (-1.2%) merchant wholesalers subsectors tempered the overall growth in the wholesale trade sector.

Public administration (+0.5%) contributed the most to the growth in August as most subsectors were up. Leading the growth was the federal government subsector (+0.8%), up for the seventh time in eight months.

Construction activity slows again on broad-based declines
The construction sector contracted for the fifth consecutive month, down 0.7% in August as all subsectors recorded decreases.

Similar to July, engineering and other construction activities (-0.9%) was the main driver behind the sector's decline in August, contracting for a second month in a row.

Residential building construction was down for the fourth time in five months, contracting 0.7% in August, in large part due to lower activity in new construction of single-detached homes, row units and apartments. Nevertheless, the level of activity in August was more than 8% above the February 2020 pre-COVID-19 pandemic level, although it has fallen nearly 14% below the peak recorded in April 2021.

Repair construction (-0.4%) contracted for the third time in five months, as both residential and non-residential repair activities were down.

Manufacturing continues to contract, led by decline in durable goods industries
The manufacturing sector contracted 0.8% in August, the fourth decline in five months and the lowest output level since January 2022.

Non-durable goods manufacturing edged down 0.2% in August, as six of nine subsectors declined. Contributing the most to the decrease were paper (-4.1%), plastics and rubber products (-1.6%), and petroleum and coal products (-0.9%) manufacturing. Meanwhile, food product manufacturing (+1.5%), along with beverage and tobacco manufacturing (+2.4%), partially offset these declines. 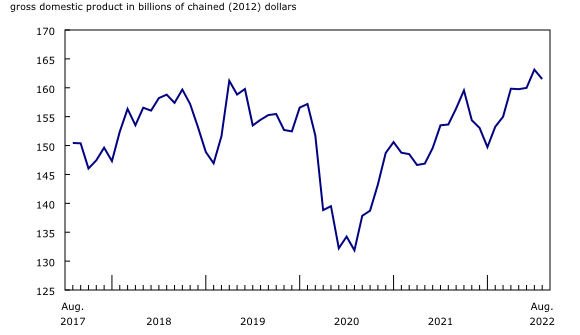 Oil and gas extraction contracted 2.0% in August, led by a decrease in oil sands extraction, following a large gain in July.

Oil sands extraction decreased 2.9% in August as lower synthetic oil production in Alberta contributed the most to the decline. Production was interrupted by the commencement of maintenance activity at a synthetic crude upgrader.

Support activities for mining, and oil and gas extraction grew 3.3% in August, mainly as a result of increased drilling activity.

The mining and quarrying (except oil and gas) subsector contracted 0.8% in August as a result of a decrease in metal-ore mining. All metal-ore mining industries decreased, with the largest decline posted in copper, nickel, lead and zinc ore mining (-4.6%). 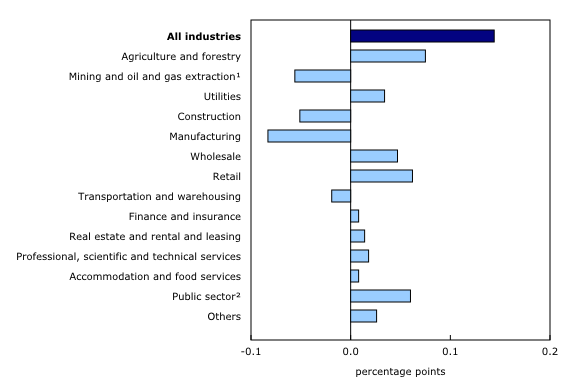 Note to readers
Monthly data on gross domestic product (GDP) by industry at basic prices are chained volume estimates with 2012 as the reference year. This means that the data for each industry and each aggregate are obtained from a chained volume index multiplied by the industry's value added in 2012. The monthly data are benchmarked to annually chained Fisher volume indexes of GDP obtained from the constant-price supply and use tables (SUTs) up to the latest SUT year (2018).

For the period starting in January 2019, data are derived by chaining a fixed-weight Laspeyres volume index to the previous period. The fixed weights are 2018 industry prices.

This approach makes the monthly GDP by industry data more comparable with expenditure-based GDP data, which are chained quarterly.

An advance estimate of industrial production for September 2022 is available upon request.

For more information on GDP, see the video "What is Gross Domestic Product (GDP)?"

Revisions
With this release of monthly GDP by industry, revisions have been made back to January 2021.

Each month, newly available administrative and survey data from various industries in the economy are integrated, resulting in statistical revisions. Updated and revised administrative data (including taxation statistics), new information provided by respondents to industry surveys, data confrontation and reconciliation process and standard changes to seasonal adjustment calculations are incorporated with each release.

Next release
Data on GDP by industry for September will be released on November 29.

The Economic accounts statistics portal, accessible from the Subjects module of the Statistics Canada website, features an up-to-date portrait of national and provincial economies and their structure.