Canada's payroll employment rose by 122,200, or 0.7% in December to 0.4% above its pre-pandemic level, led by gains in Ontario and Quebec; average weekly earnings little changed at C$1,135 in December: Statistics Canada

The number of employees receiving pay or benefits from their employer—measured by the Survey of Employment, Payrolls and Hours (SEPH) as payroll employment—rose by 122,200 (+0.7%) in December, the seventh consecutive monthly increase.

The gains in December brought payroll employment above its pre-pandemic level for the first time, surpassing the February 2020 level by 60,400 (+0.4%). The widespread emergence of the Omicron variant, and associated adjustments to public health measures, occurred later in December and were not observed in December payroll employment. 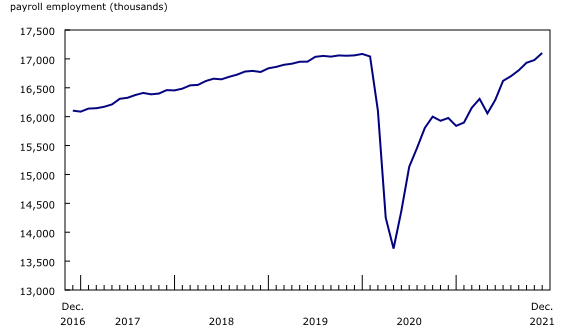 December payroll employment gains were concentrated in the services-producing sector (+108,100; +0.8%), with the largest increases in health care and social assistance (+25,600; +1.2%) and educational services (+23,100; +1.7%). Although payroll employment in the services-producing sector had surpassed pre-pandemic levels in December, not all sectors within the group have recovered at the same pace. In December, health care and social assistance (+121,800; +5.9%) was furthest above pre-COVID employment, while accommodation and food services (-170,500; -12.7%) was furthest below. 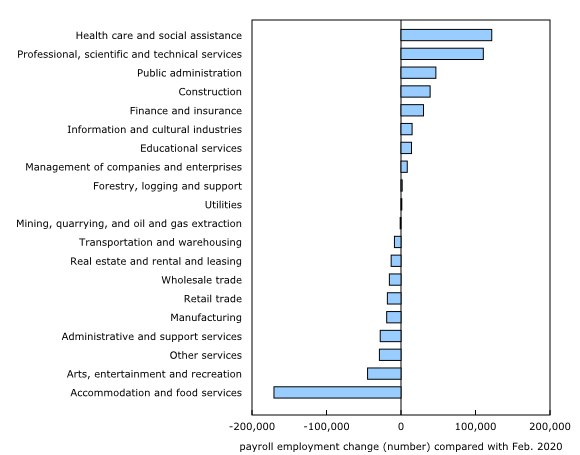 Outpatient care centres (+47,500; +43.6%), which includes mental health and substance abuse centres, was the industry furthest above its February 2020 payroll employment level in December. The Survey on COVID-19 and Mental Health indicated that there was a 4% increase in Canadians screening positive for symptoms of depression, anxiety or posttraumatic stress disorder in the spring of 2021 compared with the fall of 2020, potentially increasing the demand for mental health specialists during the pandemic. In contrast, in December, community care facilities for the elderly (-9,700; -7.0%) was the health care industry furthest below its pre-COVID employment level.

Nationally, elementary and secondary schools (+8,000; +1.0%) recorded the largest monthly payroll employment increase in December and was the industry furthest above its pre-COVID level (+12,100; +1.5%). Despite a 4.9% monthly payroll employment increase, community colleges and CEGEPs (-2,900; -2.2%) remained below its February 2020 level, as did other schools and instruction (-7,100; -8.9%), such as those primarily engaged in fine arts, athletics and sports, languages, and other types of training.

The job vacancy rate, which measures the number of vacant positions as a proportion of all positions (vacant and filled), was 5.2% in December. In other words, for every 100 positions in December, employers were seeking to fill an average of 5.2 vacancies, up from 3.0 in the fourth quarter of 2019. This increase in vacancies occurred in the context of falling unemployment, as the Labour Force Survey unemployment rate (unadjusted for seasonality) was 5.4% in December 2021, the lowest since December 2019 (5.2%).

Job vacancies increase in accommodation and food services
There were 142,300 vacancies in accommodation and food services in December, more than any other sector and up 9.4% (+12,300) compared with November. The job vacancy rate was 10.9%, the highest monthly rate across all sectors for the eighth consecutive month. Although vacancies in the sector have increased, payroll employment in the sector remained below its pre-COVID level (-12.7%; -170,600).

Looking ahead
In response to the emergence of the Omicron variant and rising COVID-19 cases, new COVID-19 public health measures were implemented near the end of December 2021 and early January 2022 in many provinces. The impact of these measures on employment and job vacancies will be reflected in the January results.

Note to readers
Survey of Employment, Payrolls and Hours
With the March 29 release of January 2022 estimates, seasonally adjusted data will be revised based on the latest seasonal factors. Seasonally adjusted estimates will be revised historically back to 2001. In addition to the new seasonal factors, historical revisions will be made for a small number of industries (four-digit level of the North American Industry Classification System [NAICS]).

The key objective of the Survey of Employment, Payrolls and Hours (SEPH) is to provide a monthly portrait of the level of earnings, employment and hours worked, by detailed industry, at the national, provincial and territorial levels.

Unless otherwise specified, average weekly hours data are for hourly and salaried employees only and exclude businesses that could not be classified to a NAICS code.

JVWS estimates are not seasonally adjusted. Therefore, month-to-month and quarter-to-quarter comparisons should be interpreted with caution as they may reflect seasonal movements.

Next release
Data on payroll employment, earnings and hours, and job vacancies for January 2022 will be released on March 29, 2022.