Canada's payroll employment increased by 114,600, or 0.7% in June, with Ontario and Quebec registering the largest increases; average weekly earnings unchanged from May at C$1,159: Statistics Canada

Chart 1: Payroll employment bounces back in June after declining in May 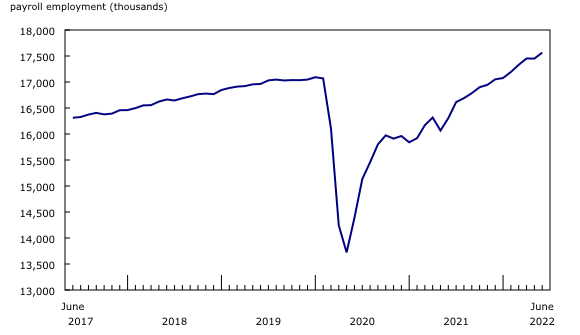 Job vacancies reach a new high
Vacancies increased 3.2% (+32,200) in June, and employers in Canada were actively recruiting for more than one million (1,037,900) vacant positions for the third consecutive month (not seasonally adjusted). Total labour demand (the sum of filled and vacant positions) reached a record high of nearly 17.7 million in June, 1.4% (+238,700) higher than in May and up 9.4% (+1,526,000) on a year-over-year basis. The job vacancy rate, which measures the number of vacant positions as a proportion of all positions (vacant and filled), was 5.9% in June, matching the record-high rate reached in September 2021 and up from 4.9% in June 2021.

New data developed by Statistics Canada to remove seasonal variations suggest that recent month-over-month increases in job vacancies were not attributable to seasonal patterns, indicating that job vacancies have been trending upward since December 2020 after somewhat stabilizing in October and November 2020. 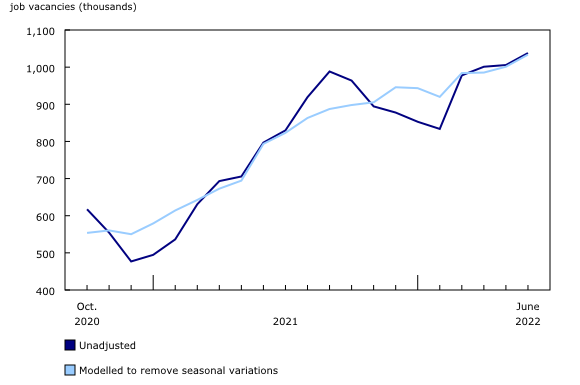 Job vacancies exceed the number of unemployed persons in four provinces
Nationally, the unemployment-to-job-vacancy ratio reached a record low of 1.0 in June, meaning that there was one unemployed person for each vacant job. This ratio was 1.9 in June 2021.

Unless otherwise specified, average weekly hours data are for hourly and salaried employees only and exclude businesses that could not be classified to a North American Industry Classification System (NAICS) code.

Next release
Data on payroll employment, earnings and hours, and job vacancies for July will be released on September 29.