Canada's number of business openings in April decreased 0.2% to 4.7% from March, while closures fell to 4.4%; number of active businesses increased by 0.3% month-over-month: Statistics Canada

The decline in the national business closure rate was mainly driven by Ontario (-1,222), where it dropped to 4.7% in April, from 5.0% in March. The closure rate decreased or was little changed in the other provinces. The decline in the business opening rate was widespread across provinces. The number of active businesses increased or changed little in all provinces. Furthermore, Newfoundland and Labrador and Alberta were the lone provinces where the number of active businesses has not yet returned to February 2020 pre-pandemic levels.

Although the number of active businesses has generally been increasing in the tourism industry since spring 2020, in April 2022 it remained below pre-pandemic level. The other industries with the number of active businesses still below February 2020 levels were other services (except public administration) (-2.0%; -1,456), wholesale trade (-3.1%; -1,192), mining, quarrying, and oil and gas extraction (-7.5%; -428), and finance and insurance, and management of companies and enterprises (-0.7%; -201).

The series on temporary business closures and exits (or "permanent closures") is now updated to include data up to October 2021. The exit rate held steady at 1.6% for the third consecutive month in April 2022 and remained slightly below its historical average of 1.7%. 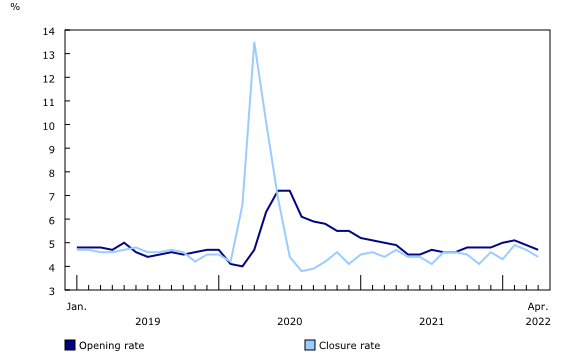 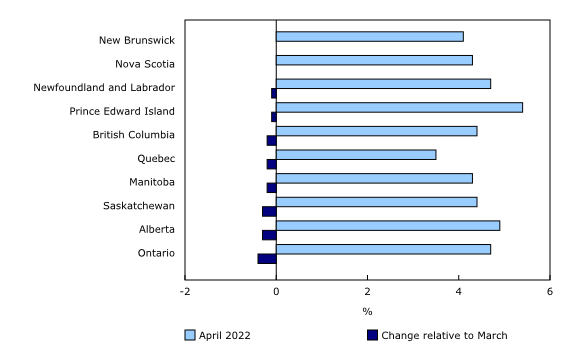 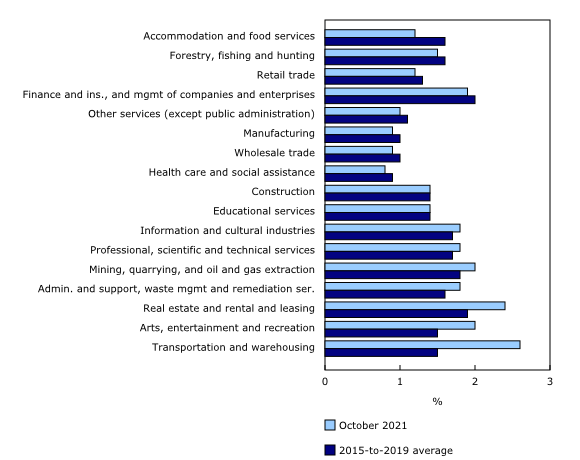 Note to readers
April's release introduced a new process for seasonally adjustment in the presence of the outliers generated by the response to the COVID-19 pandemic. The new process has a greater number of outliers that are explicitly recognized at the outset of the seasonal adjustment process. This leads to a greater number of outliers being taken into account than was previously occurring. Examinations of seasonally adjusted data using the new process show results that are more stable over time and produce smaller revisions.

Every new month of data leads to a revision of the previously released data due to such factors as the seasonal adjustment process and a new version of the Generic Survey Universe File (or vintage of the Business Register). As such, the estimates may vary compared with a previous release.

The definition of exits is based on the Longitudinal Employment Analysis Program (LEAP) annual exits. Because the LEAP definition can require up to 24 months of data to be counted as an exit, projections of exits using predicted growth rates are implemented using a regression model of exits on closures of more than six months. As a result, there are no published exits in the last six months. A temporary business closure is the difference between closures and exits. For more information on temporary business closures and exits, see "Defining and measuring business exits using monthly data series on business openings and closures."

A business is defined as an enterprise operating in a particular geography and industry.

The vast majority of businesses operate in one industry and one location or geography. For these businesses, in the monthly estimates of openings and closures, they will be counted once at the national/provincial level. For example, a retailer in Windsor, Ontario, will be counted as an active business in the Ontario estimates and once in the national estimates.

Some businesses can have multiple operations, and these can be in different industries and geographies. For such businesses, in the monthly estimates of openings and closures, they can be counted more than once because they are active in multiple industries or geographies. For example, if a retailer has operations in both Alberta and Ontario, it will be counted as an active business in both provinces, but only once at the national level because it represents only one active firm. Similarly, a firm with retail and wholesale operations will be counted in both industries when individual industries are examined. However, when the business sector is examined, the firm counts only once because at that level it represents one firm active in the business sector.