Canada's merchandise trade balance moved to a deficit of C$137M in December from a surplus of C$2.5B in November; merchandise imports rose 3.7% while exports decreased 0.9%: Statistics Canada

In December, Canada's merchandise imports rose 3.7%, while exports were down 0.9%. As a result, after posting six consecutive monthly surpluses, Canada's merchandise trade balance returned to a deficit position. It moved from a surplus of $2.5 billion in November to a deficit of $137 million in December, a position considered to be essentially balanced. 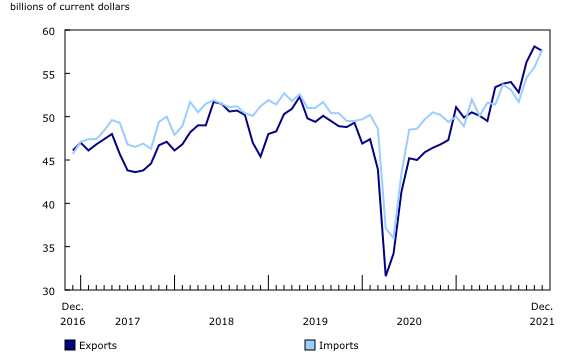 Cellphone imports end 2021 with an increase after a year marked by instability
Total imports rose 3.7% in December to a record $57.7 billion. This was the third consecutive monthly increase, and gains were observed in 8 of the 11 product sections. In real (or volume) terms, total imports rose 3.1%.

Chart 2: Contribution to the monthly change in imports, by product, December 2021 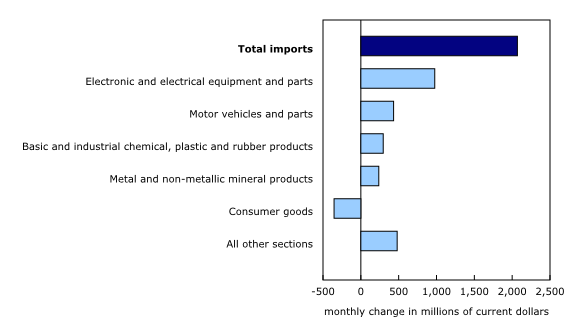 Imports of electronic and electrical equipment and parts posted the largest increase in December, rising 16.2% to an all-time high of $7.0 billion. While all subcategories posted growth, imports of communication, and audio and video equipment (+52.1%) had the largest increase. This subcategory, which is largely composed of smartphones, experienced strong monthly variations in 2021, primarily because of disruptions in the global supply chain. This appeared to slow the growth of these imports throughout the year, and the increase in December partially offset this trend. Despite the gain in December, annual imports of communication, and audio and video equipment were down 5.4% in 2021 compared with 2019, the last year for which data are comparable for these products.

Chart 3: Imports of communication, and audio and video equipment 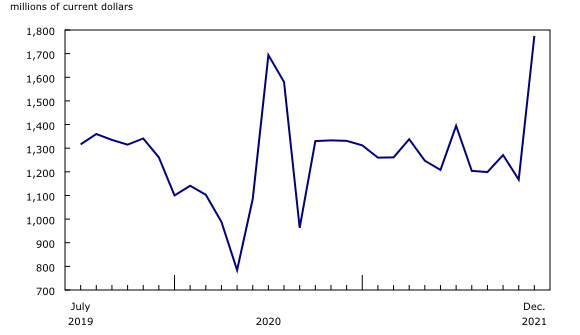 Imports of motor vehicles and parts rose 5.1% in December to $8.9 billion, their highest level since February 2020. The increase in imports of motor vehicle engines and parts (+15.6%) contributed the most to the monthly growth. In December, Canadian auto plants typically close temporarily for the holidays, leading to a significant decline in production month over month. In 2021, because of the supply issues that affected the industry, the decline in Canadian production from November to December was weaker than usual, resulting in higher imports of engines and parts on a seasonally adjusted basis (+15.6%), as well as an increase in exports of passenger cars and light trucks (+8.4%).

Imports of basic and industrial chemical, plastic and rubber products rose 6.2% to a record $5.0 billion in December, a third consecutive monthly increase. Imports of fertilizers, pesticides and other chemical products (+36.8%) contributed the most to the monthly gain. As mentioned in the November 2021 release of the Industrial Product Price Index, a wide range of events affected this industry recently, including lower production in China and new quotas imposed on fertilizer exports in Russia. These events led to higher prices and atypical movements in Canadian imports. Although the prices of fertilizer imports have recently risen sharply, the increase in December was mainly attributable to higher volumes.

Chart 4: Contribution to the monthly change in exports, by product, December 2021 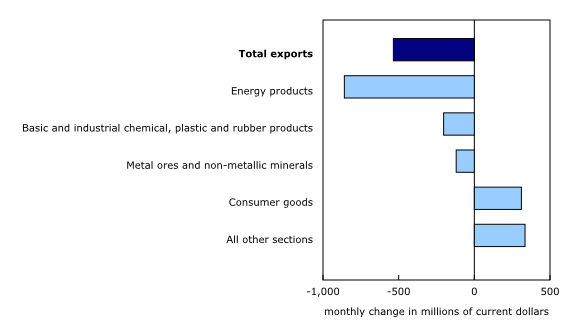 Exports of energy products fell 5.9% in December, the first monthly decline since April. Crude oil exports (-5.0%) contributed the most to the decrease, on a sharp decline in prices. Despite the value of crude oil exports falling, volumes were up for a second consecutive month, coinciding with an increase in pipeline capacity. Coal exports (-33.5%) also contributed to the decrease, falling for a second straight month. This drop coincided with recent disruptions in freight transportation in Western Canada because of flooding in British Columbia. Despite the monthly decline, exports of energy products rose 82.8% in 2021 compared with 2020, the largest annual increase among all product sections.

Partly offsetting these declines was a 4.3% increase in exports of consumer goods in December, primarily on stronger exports of pharmaceutical products (+16.5%). In November, large shipments of medication for the treatment of COVID-19 arrived in Canada for packaging and labelling, and some of this medication was subsequently exported during the same month. These exports continued in December and largely accounted for the increase in foreign shipments of pharmaceutical products. 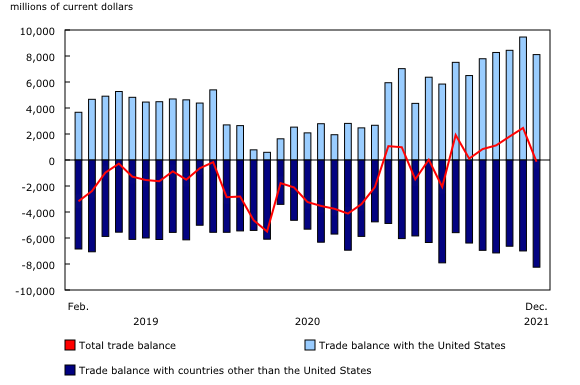 When the average exchange rates of November and December are compared, the Canadian dollar lost 1.4 US cents relative to the American dollar. 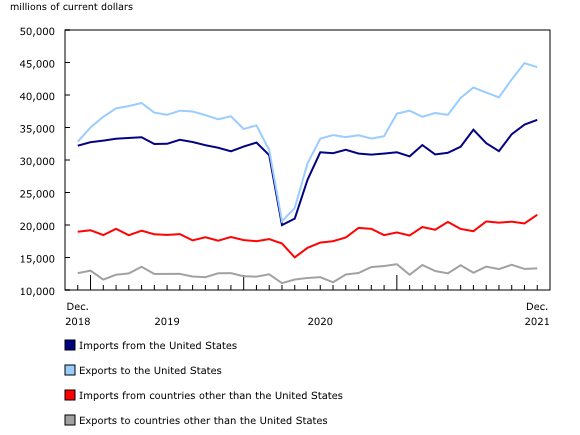 Growth in quarterly imports and exports
Canada's merchandise exports rose 7.1% in the fourth quarter of 2021. Exports of energy products (+17.6%) were responsible for more than half of the quarterly increase. Exports of motor vehicles and parts (+15.5%) and consumer goods (+7.4%) also contributed to the gain.

Imports rose 5.9% in the fourth quarter, a sixth consecutive increase. Imports of consumer goods (+9.2%) and motor vehicles and parts (+12.1%) contributed the most to the gain.

Despite supply chain disruptions, total export and import values reach record highs in 2021
Canada's international trade in 2021 was marked by global supply issues that created much uncertainty and disrupted production in many industries and countries. For example, problems with the supply of semiconductor chips limited manufacturing in Canada, especially motor vehicle manufacturing, and this had an impact on exports. These global issues also affected imports of a number of finished products, such as communication devices and clothing. It is within this context that Canadian merchandise imports and exports posted large monthly movements in 2021. Supply issues also drove the prices of raw materials up sharply, although this had a positive impact on Canada's export values.

In 2021, Canada's annual merchandise exports rose 22.0% compared with 2020, when exports fell 12.3% because of restrictions in place during the first waves of the pandemic. Annual exports reached a record $637 billion, exceeding the previous record set in 2019 by 7.0%. The prices of exports played a key role in the annual increase in 2021. When the effect of prices is removed, exports in constant dollars rose 1.9% in 2021, but still remained 5.4% lower than in 2019.

Strong export prices throughout the year enabled the merchandise trade balance to post surpluses for nine months in 2021. The annual trade surplus totalled $6.6 billion, the first such surplus since 2014, and the largest since 2008.

Consult the "International Trade Explorer" to explore the annual results of Canada's international trade (on a customs basis) in an interactive format.

Note to readers
Merchandise trade is one component of Canada's international balance of payments (BOP), which also includes trade in services, investment income, current transfers, and capital and financial flows.

International trade data by commodity are available on both a BOP and a customs basis. International trade data by country are available on a customs basis for all countries and on a BOP basis for Canada's 27 principal trading partners (PTPs). The list of PTPs is based on their annual share of total merchandise trade—imports and exports—with Canada in 2012. BOP data are derived from customs data by adjusting for factors such as valuation, coverage, timing and residency. These adjustments are made to conform to the concepts and definitions of the Canadian System of National Accounts.

The data in this release are on a BOP basis and are seasonally adjusted. Unless otherwise stated, values are expressed in nominal terms, or current dollars. References to prices are based on aggregate Paasche (current-weighted) price indexes (2012=100). Movements within aggregate Paasche prices can be influenced by changes in the share of values traded for specific goods, with sudden shifts in trading patterns—as observed currently with the COVID-19 pandemic—sometimes resulting in large movements in Paasche price indexes. Volumes, or constant dollars, are calculated using the Laspeyres formula (2012=100), unless otherwise stated.

Revisions
In general, merchandise trade data are revised on an ongoing basis for each month of the current year. Current-year revisions are reflected in both the customs-based and the BOP-based data.

Factors influencing revisions include the late receipt of import and export documentation, incorrect information on customs forms, the replacement of estimates produced for the energy section with actual figures, changes in merchandise classification based on more current information, and changes to seasonal adjustment factors. The seasonal adjustment parameters are reviewed and updated annually, and applied with the October reference month release.

Revised data are available in the appropriate tables.

Next release
Data on Canadian international merchandise trade for January 2022 will be released on March 8, 2022.

The updated "Canada and the World Statistics Hub" (Catalogue number13-609-X) is now available online. This product illustrates the nature and extent of Canada's economic and financial relationship with the world using interactive charts and tables. It provides easy access to information on trade, investment, employment and travel between Canada and a number of countries, including the United States, the United Kingdom, Mexico, China, Japan, Belgium, Italy, the Netherlands and Spain.

To enquire about the concepts, methods or data quality of this release, contact Benoît Carrière (statcan.mediahotline-ligneinfomedias.statcan@statcan.gc.ca), International Accounts and Trade Division.