GlobalData: Lack of government support has stunted Mexico's growth of renewables, and its aim to achieve 35% of electricity generation from clean energy sources by 2024 doesn't look feasible; however, Mexico has huge potential to harness power from wind

Since the change in government in 2018, the growth in Mexico’s renewable power sector has been slower, growing from 10.2 GW to 17.8 GW compared to the growth the sector saw between 2013 and 2018, where constitutional reforms allowed the renewable sector to take on a larger role allowing the industry to grow from 3.5 GW to 10.2 GW, observes GlobalData.

The leading data and analytics company’s latest report, ‘Mexico Power Market Size, Trends, Regulations, Competitive Landscape and Forecast, 2022-2035’, notes that the country’s present government is looking for ways to restore renewable energy’s positive growth trajectory and passed a bill in March 2021 to assist with this. The government has stated that this is to minimize corruption and induce healthy competition between the state and private companies. However, the amendment has led the Federal Electricity Commission (Comisión Federal de Electricidad, CFE) to take control of the power sector.

As per the amendment, the CFE owns at least 54% of the power market and will prioritize its own power generation and not the lowest cost power. The CFE generates power from nuclear, hydro, natural gas, and oil. Most of the green power produced in the country is by the private sector which means that with the current reform it would be dispatched last, despite being cheaper. This will eventually make the sector less attractive to private players and will gradually lead to increased electricity bills for end-consumers.

Attaurrahman Ojindaram Saibasan, Senior Power Analyst at GlobalData, comments: “Despite having a strong presence since the 2000s, the Mexican renewable power market has witnessed slow growth due to administrative barriers. Electricity generation is dominated by thermal power technology, accounting for a share of 70.7% in total generation in 2021. The country’s first renewable power auction was conducted in 2016 and between 2016 and 2018, three rounds of auctions were conducted awarding nearly 7.7 GW of renewable power capacity. The fourth auction, scheduled to be held in 2018, was cancelled with the government stating that the auctions were only delayed however, they still have not been rescheduled.”

Under the Energy Transition Law, Mexico aims to achieve 35% of its electricity generation from clean energy sources by 2024, 39.9% by 2033, and 50% by 2050. Despite this, the targets do not seem achievable, especially with the government still favouring traditional technologies of electricity generation. Even with the inclusion of large hydro and nuclear power generation in its clean energy targets, Mexico is still not on track to meet its goal. 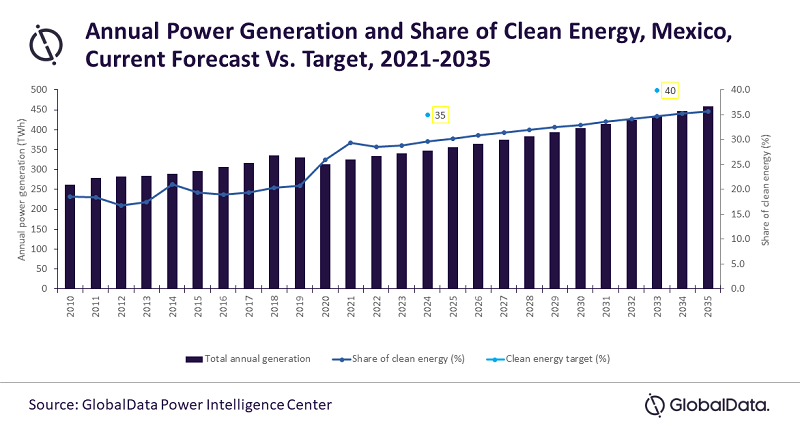 Saibasan adds: “Mexico has massive potential to harness power from wind. The states of Oaxaca, Yucatan and Tamaulipas have registered wind speeds greater than 8 m/s. Additionally, as the majority of the areas in Mexico receive an average insolation of 4.5 kWh/m2 daily, solar PV also has huge development potential. The government should look at exploiting this potential and expedite stalled renewable auctions. Some ways this could be achieved include providing incentives to encourage private participation even at the small-scale, frame favourable policies, and creating a competitive market encouraging private participation.”