The Proxy Preview team today released highlights of the unprecedented 2022 proxy season, which so far has seen a record-breaking 282 votes and 34 majorities votes favoring disclosure and action on environmental, social, and sustainable governance (ESG) shareholder resolutions.

The number of majority votes for these proposals is the same as last year at this point. Six of the majorities — including five on climate change — came when companies did not voice opposition. At least two dozen more votes are possible by year’s end and more majorities are likely.

“It was a blow-out year for resolutions, with a nearly 60% increase in votes,” said Heidi Welsh, executive director of the Sustainable Investments Institute and co-author of Proxy Preview. “There was a precipitous drop in the number of proposals blocked by company challenges at the U.S. Securities and Exchange Commission (SEC), because of an interpretive shift last November. Investors and companies also found lots of common ground, in the same proportions as the past. The number of majority votes on the environment and diversity stayed the same or rose, but there was a notable drop in majorities for corporate political influence disclosure because the mix of resolutions changed. Many companies already have board oversight and disclosure and there’s more focus now on whether supported candidates hold views consistent with expressed corporate values.”

“This year's record-breaking number of filings and continued strong votes demonstrate that investors truly care about environmental and social risks. This aligns with new polling that 85% of Americans agree that companies must disclose more about their business practices and impact on society,” said Andrew Behar, CEO of As You Sow and Proxy Preview publisher. “The polling also shows nearly universal agreement that America’s largest companies affect society deeply. Shareholder advocates continue to provide innovative ideas for how companies can avoid risks to employees, customers, communities, and supply chains, and create prosperity and justice.” 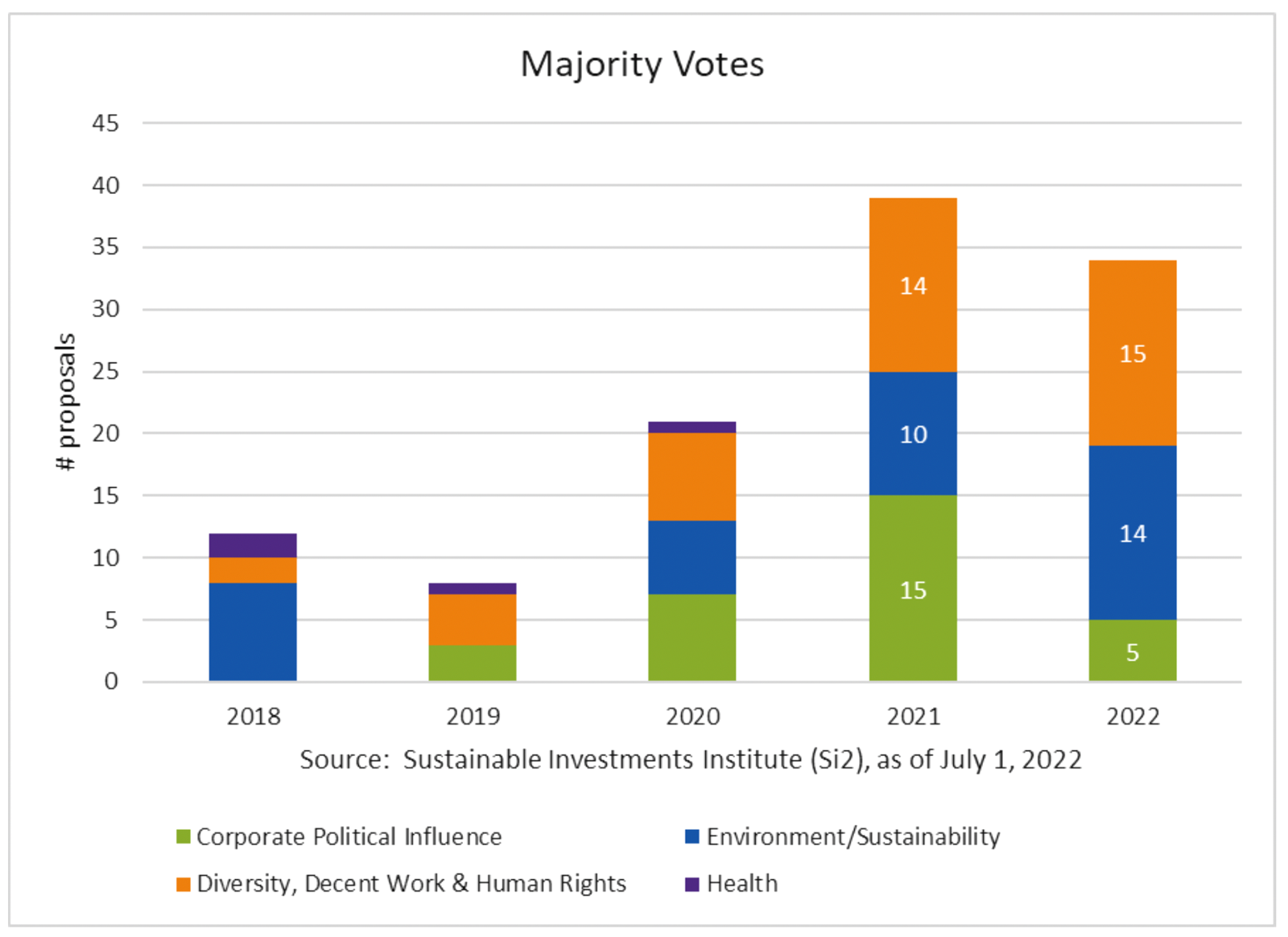 The long-running effort to persuade companies to report on pay disparities on the basis of gender, race, and ethnicity notched two wins:  59.6% at Walt Disney and 58% at Lowe’s.

Guns: In the face of continued and widespread gun violence, investors at Sturm, Ruger voted two-thirds of their shares (68.5%) in favor of a human rights risk assessment.

Climate and environment: Nearly all the much-expanded slate of proposals about climate change focused on plans, goals, and reporting on how to achieve net-zero greenhouse gas emissions. This prompted no management opposition at five companies and votes over 90% for reporting on methane reduction targets at Chevron, reporting on carbon footprint reduction plans at Caterpillar and Boeing, and for adopting net-zero carbon reduction targets at food distributor US Foods Holding and construction supplier Builders FirstSource.

Political influence spending: There were fewer proposals about general oversight and disclosure of election spending and lobbying, but four majorities — two coordinated on elections (57% at Dollar General and 53.4% at Twitter) and two on lobbying (60.4% at Netflix and 52.7% at Travelers).

Most notable this year, however, were resolutions that trod new ground, seeking not just oversight and disclosure but the assessment of misalignment between stated company policies and actions taken by politicians the companies support. An entirely new proposal about lobbying and values earned the fifth political influence majority — 50.2% at Gilead Sciences — and 43.3% at Johnson & Johnson. Six more lobbying disclosure proposals earned 40% to 49%, as did one more on election spending.

It’s clear companies will face increased scrutiny of their election spending as the fall midterms approach and public policy debates roil the country. One key example from proxy season is proposals coordinated by Rhia Ventures that noted company support for diversity and inclusion despite heavy support for state politicians who are rolling back reproductive health rights. There were high votes at AT&T (44.1%) and Home Depot (42.6%). With Roe v. Wade overturned by the U.S. Supreme Court, many similar values congruency resolutions are likely in 2023. Access to reproductive health benefits and risks to companies posed by new abortion bans in half the country spurred votes of 32.2% at Lowe’s and 30.2% at TJX — also giving a foretaste of what to expect next year. 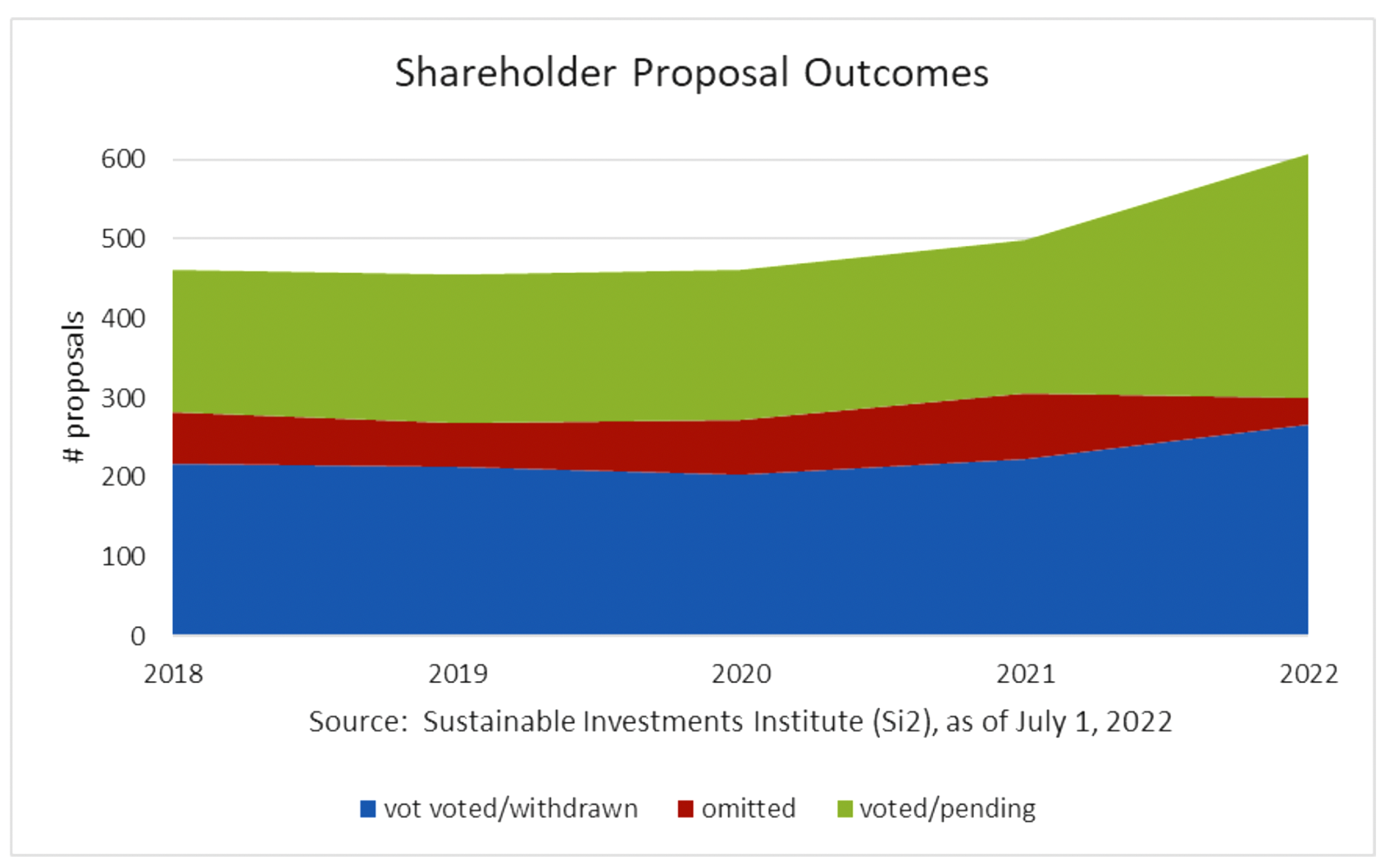