Rumen-protected lysine--an essential amino acid for dairy cows that can help improve milk production--can improve the uterine health of cows if fed during the transition period, according to new study from the University of Illinois 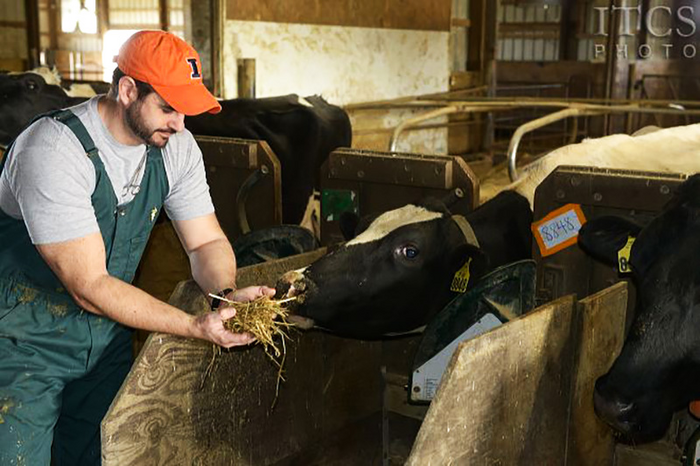 UNIVERSITY OF ILLINOIS COLLEGE OF AGRICULTURAL, CONSUMER AND ENVIRONMENTAL SCIENCES

Lysine is an essential amino acid for dairy cows, helping boost milk production when added to the diet at adequate levels. But could lysine benefit cows in other ways? A new University of Illinois study shows rumen-protected lysine can improve uterine health if fed during the transition period.

“Right after calving, the uterus is undergoing a lot of changes. The cow had 100 pounds of calf, placenta, and fluids in there, but by 30-40 days after calving, the uterus has to shrink back down and get ready for the next pregnancy. There are a lot of cells regenerating, and the cow is potentially vulnerable to infection and inflammation at that time,” says Phil Cardoso, associate professor and faculty Extension specialist in the Department of Animal Sciences at U of I.

Cardoso and his team added a rumen-protected lysine product to total mixed ration (TMR) at 0.54% for 28 days pre-calving. After calving, the lysine was added at 0.4% for an additional 28 days. Cows got the lysine additive before or after calving, or both, with an additional control group consuming no supplemental lysine in either time period.

“We found genes involved with producing inflammatory proteins in the uterus were reduced with rumen-protected lysine, especially in cows that consumed the amino acid before and after calving. And genes involved in keeping the uterus clean were more active. Altogether, our results indicate less inflammation in these cows, meaning they can spend less energy defending against infection,” Cardoso says. “It’s just more efficient.”

Along with characterizing gene expression in the uterus, the team looked for evidence of metritis, a uterine infection affecting 30% of U.S. dairy cows after calving. While the overall inflammation status of the uterus improved with lysine supplementation, the researchers didn’t detect a statistical difference in metritis in cows that consumed lysine and those that didn’t.

“Metritis is the clinical presentation of uterine inflammation. It requires a larger degree of challenge from the environment to show up. Perhaps our farm does not present real stress in that regard. We did find a difference in the sub-clinical form, also called subclinical endometritis. When we counted the number of inflammatory cells (PMN) in the uterus, cows receiving rumen-protected lysine had a lower number of cells, indicating less inflammation,” Cardoso says.

The team also tracked the first postpartum follicular growth cycle in the ovaries. Lysine didn’t affect time to first ovulation – that averaged 18 days in milk for all groups – nor the follicular diameter at ovulation.

Cardoso is neither surprised nor disappointed that lysine didn’t affect ovulation. He says the health of the uterus right after calving is more important than producers think.

“When you ask farmers how they assess reproductive progress and fertility, the answer is always pregnancy. Usually farmers are breeding cows around 60 to 70 days after calving, but if it is unsuccessful, it's often because of events like metritis or subclinical endometritis that happen prior to breeding, earlier in the cycle. This research shows rumen-protected lysine can set your cow up for success right after calving so she can achieve a favorable pregnancy later.”

The effects of lysine line up with Cardoso’s earlier work looking at rumen-protected methionine, another limiting amino acid in dairy cows. He showed methionine affected genes related to inflammation and estrogen production, and increased embryo survival.

“Our recommendation is to use both rumen-protected methionine and lysine,” Cardoso says. “We know both amino acids are limiting in dairy cows, but it’s not clear that standard dietary sources – corn or bloodmeal – make it through the rumen to supply cows with the amount they need.”

Although rumen-protected lysine and methionine products aren’t widely integrated in commercial feeds, Cardoso says nutritionists are starting to recognize their importance in the industry.

“Nutritionists are the ones that come up with what's needed to get results, and they’re becoming aware of rumen-protected amino acid products. But we want to educate farmers, too, so they’ll be able to start the conversation with nutritionists. Asking, ‘Hey, is this something that could help me?’”

The study, “Effect of feeding rumen-protected lysine through the transition period on postpartum uterine health of dairy cows,” is published in the Journal of Dairy Science [DOI: 10.3168/jds.2022-21934]. Authors include Anne Guadagnin, Laura Fehlberg, Brittney Thomas, Yusuke Sugimoto, Izuru Shinzato, and Phil Cardoso. The project was funded in part by the USDA National Institute of Food and Agriculture.

The Department of Animal Sciences is in the College of Agricultural, Consumer and Environmental Sciences at the University of Illinois Urbana-Champaign.